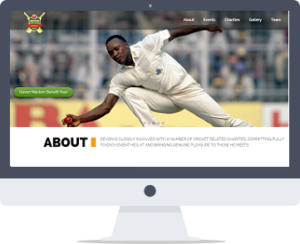 Devon Malcolm’s benefit year is now in full swing, after the celebrity game at Brixworth cricket club. Devon picked through his contacts to find the best team he possibly could for the challenge of Brixworth who are in the Premier division of the Northamptonshire cricket league. Devon has a passion for giving children the chance to play cricket, this was apparent on the morning of the 3rd July when over 60 local primary school children received coaching from an array of Brixworth CC coaches, as well as ex-England players, Alex Tudor and Adam Hollioake.
The VIP marquee guests were then treated to a delicious three course meal, which was accompanied by the live steel drum band and a beautiful rendition of Nessun Dorma by the ex-Zimbabwean international Henry Olonga. The silent auction also took place, which along with the rest of the Benefit Year, was raising money for Devon’s three chosen charities, Chance to shine; The Lord’s Taverners; Jamaican Hospitals League of Friends.
The ground and wicket were in perfect condition for the T20 and the crowd was slowly building as the game commenced at 3pm. The International XI batted first and after a shaky start, they recovered to score 205-7, thanks largely to the power hitting from Alex Tudor (72 runs off 38 balls, including 10 fours and 4 sixes) and Northants player Rory Kleinveldt (84 runs off 38 balls, including 7 fours and 6 sixes). Brixworth fancied their chances none the less because of the aforementioned conditions; it was Tom Worthington and Fred Newborough who opened the batting for the home side, facing up against Devon Malcolm and Justin Brathwaite. They put on 80 for the first wicket and Brixworth were up with the run rate for a large part of the game, but some tight bowling from Martin Bicknell in the middle overs restricted the hosts to 190-5 from their 20 overs.
So, the International XI won by 15 runs, however, the day more importantly raised over £20,000 and a lot of awareness for the three charities.
For more information about the remaining events in the Benefit Year, visit the website: http://www.devon-malcolm-benefit-year.co.uk/

Do you need to beware the Google Penguin?